So This Is Writing?

So This Is Writing? 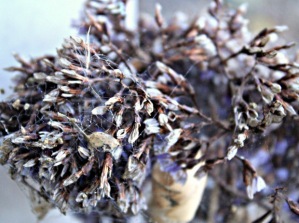 The smell of lavender permeated the air, its swirling spicy scents mixing with the warm sensation of spring.  Mary closed her eyes and breathed deeply, letting the calming aroma envelope her in memory.

It had been years since she had really thought about him although he had been on her mind, in some way or another, every moment since they had parted.  It was only now, with the scent of lavender settling on her skin, that she could remember his voice, the wrinkles around his smile, the smell of his hair.  How long had it been?

She opened her eyes and felt the stinging threat of tears stab at the corners.  Mary blinked a few times and continued to walk, her feet sending up tiny droplets of rain in splatters around her.

Mary tried to push the lavender, and the curiosity of where it had come from, out of her mind.  She had walked to work this same way every day for at least two years, and never before had she smelled lavender.  What she did know was this–she had to get past him or she might not survive.

When Steve had left, she thought her world had ended.  Everything seemed dull, bland, inhuman, without his smile, his passion.  Her body felt broken, not just her heart.  They both had wanted different things although she couldn’t quite remember the differences now.  She hadn’t wanted to let go, but Steve had given her little choice.  He stepped onto that bus and left her behind.

As she splish-splashed through the rainy morning, Mary decided to bypass work and take a walk.  She needed to clear her head even if she had forgotten an umbrella.  But, things only became more confusing and aggravating as the morning wore on.

The receptionist at her office barely replied when Mary called in to let them know she wouldn’t be arriving until later that afternoon.  It was as if the woman hadn’t been listening.  At the coffee shop where Mary always bought her morning brew, the barista skipped her in line and Mary almost didn’t get served.

Aside from the obvious lack of customer service, Mary was enjoying the wet day.  The rain glinted off the sharp edges of the city, refracting light in marvelous rainbows painted on the pavement.  Mary put on her sunglasses and veered off the sidewalk and into the park.

She remembered strolling here right after she and Steve had begun dating. He used to twine his fingers with hers and gently pull her along the tree-lined paths and so they could sit near one of the bubbling streams that dotted the park.  He had always been a romantic.  That was one of the things she loved about him.  Mary had always thought romance was silly until she met Steve.  He had brought out her romantic side, and she longed for the days they spent together.

Mary picked up her pace thinking speed might stop the ache that had begun to wiggle into her chest.  All the could think of was his hands on her cheeks, his lips kissing hers, the constellations of freckles on his chest.  She missed him with all of her being, and she wondered why it had taken her so long to realize how much she needed him.

Mary could feel her feet pounding the earth, the rain soaking her ankles, but she couldn’t stop running.  She wanted to put the past two years behind her and run straight to Steve’s arms, but when she looked up, she was standing in the middle of Hilltop Cemetery.

Her stomach dropped as if she almost remembered why he had left her.

The rows of gravestones stood like skeleton’s teeth gnawing at the gray sky.  Mary walked between the crumbling stones attempting clarity of why this place seemed so familiar.  Before today, she never remembered setting foot inside the fences of this old cemetery, but it also seemed to pull at her, to urge her onward.

And, then the lavender came once more.  Mary’s nostrils filled with that spicy yet muted, warm yet cool scent and it drove her to her knees.  Hot tears sprung from her eyes and mingled with the cold raindrops splattering her cheeks.  In front of her sat a tombstone, one with a bunch of lavender obscuring the name.  A spider’s web wound its way through the buds, and the tiny silk threads caught the falling drops, sending sparkles over the purple flowers.

Mary gently pushed the flowers aside and read the name on the grave–Mary Elizabeth Downing: loving wife and best friend.  The memories flooded back to her, sending her sprawling onto the muddy ground.  Steve hadn’t left her after all; it had been she who had broken him.

Mary starred up into the dark sky and watched the raindrops fall.

This was written in response to the Weekly Writing Challenge–Traces.  The picture was included with the prompt.